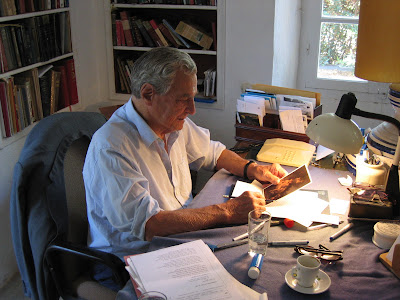 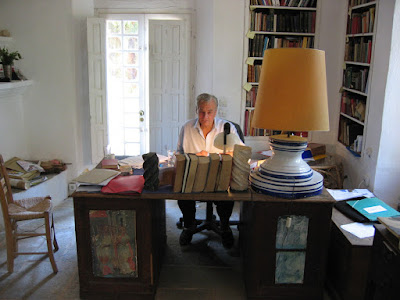 In early 2001 restless and tired of my uneventful life I had the ambition to take a long walk and think things over. Hearing my complaints a good friend suggested to me that I should read Patrick Leigh Fermor's two books "A Time of Gifts" and "Between the Woods and the Water". Who? Was my reply. A bit surprised of my ignorance, he later supplied me with a tattered copy of the first book which would become a huge inspiration behind my travel ambitions. A few weeks later I discovered a near new copy of the second in the series of a planned trilogy. Then I had a great idea! I would write to Penguin Australia and naively ask them to forward my hand written letter to the author seeking his advice for my proposed walking tour across Europe.

This could have been the end to the matter. However and quite unexpectedly some weeks later a tiny envelope from Greece arrived into my post box. Inside it contained a two page hand scrawled response to my request  from the author himself Patrick Leigh Fermor. Common sense explained that I should not merely follow the same route he had taken all those years ago, since the world had changed to that of his youth when in hob nail boots he tramped across 1930s Europe. There and then he was really heading into the unknown! Instead he advised I should nonetheless traverse Europe, but perhaps begin in Portugal, Spain or France and head towards Eastern Europe by way of Poland and the Baltic States, before entering into Russia. From there I should swing down into the Crimea before plunging into the Caucasus. From there I could logically enter Turkey via Trebizond, following Xenophon's Anabasis in reverse - all Greek to me -  before heading westwards to along the Turkish coastline! These were places he had always wanted to travel to, but now time was catching up on him and he doubted it would be possible. My head was by this time spinning in excitement with conflicting ideas into where and indeed when I should go.

Over the following months I did some level of research and discovered that the world had indeed changed very much from his youth, not to mention the red tape and costs of modern day travel. Tramping in hob nail boots with a few meagre possessions through the unknown was very romantic an idea to me then and is still now, but pulling it off was going to be a real challenge. 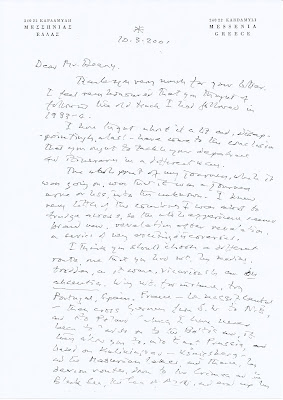 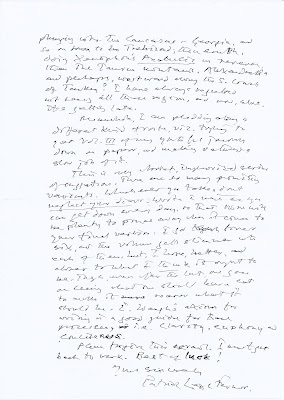 A year later I was travelling from my front door in Melbourne by bicycle to Darwin, a safe 5000KM across the Australian continent. However I hadn't full filled my dream for a truly epic adventure. By 2003 I landed a teaching job in South Korea, so was financially secure into taking any extended tour beyond the backpackers trail. During my lunch breaks and on weekends I would hike the forested hills above Busan dreamily awaiting my freedom from the drudgeries of working life. Then at the end of my teaching contract in mid 2004 I set off by surface travel all the way from the Pacific to the Atlantic Ocean. However I would not be entirely going my own way on foot, infact much of it was by rail or ferry. Nonetheless I was still spirited with this ambition to plunge into the unknown. Therefore this journey of 6 months did indeed take me to the lofty peaks of the Caucasus in Georgia and Trebizond (today's Trabzon) to inspect the cave monasteries of Sumela. Then on the advice from Patrick Leigh Fermor, three and a half years before, I went westwards along the southern Turkish coastline. 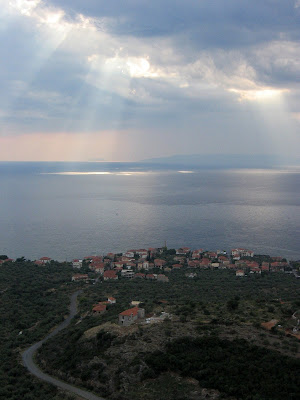 I entered Greece in its prosperous and glorious moments of the 2004 Olympic year, but had no intentions of making my way to the capital. It was the allure of Crete and the Southern Peloponnese which were the attraction. Finally I was in Kardamyli in the Mani. I rented a room in a guest house for several days with intentions of long walks in the Taygetus Mountains. It was at Lela's Taverna where I found friendly company, wholesome Greek home dinners and Fix beer. On about my second day there I asked the proprietor if by any chance they knew of a British writer by the name of Patrick Leigh Fermor. She laughed and said that everybody knew Mr Leigh Fermor and that he often walked the couple of kilometres from his home to her restaurant for lunch. Then I asked, with high expectation and probably no avail, how I would find my way to Mr Leigh Fermor's? Without the least of hesitation she gave me directions and soon I was on my way through the olive grove and beyond the little white church to find a walled but welcoming residence. I knocked, expecting nobody to be at home or to be told not to be bothered by a grumpy old Brit. However this was not the case here. Instead a young housekeeper soon answered, but informed me ever so politely that Mr Leigh Fermor does not generally invite in strangers. I some how expected this and asked her if she could please let him know that I had travelled all the way from Australia (partially true) and would greatly appreciate meeting him, but only if he was well or not busy. She closed the door and a few tedious minutes later returned to inform me that Mr Leigh Fermor would be pleased to meet me.

On my first glimpse of the man I was struck by how young he looked for somebody who was evidently approaching his 90th year. As I entered the expansive courtyard of his home nervously I greeted him as Mr Fermor. He smiled and asked if I would care for a coffee and that I could join him in his studio. There I found a modest white washed room in proportion with two inset book shelves containing many-a-well-read volumes all behind a seemingly cluttered, but actually highly organised writing desk with out computer or even typewriter. This was in fact the work station to one of Britain's greatest living travel writers. Coffee  soon arrived and I was quite unclear to what I should ask. I didn't honestly know much about the author beyond his published works and was careful into bombarding him with difficult questions and seeking answers. I expected that he had had alot of experience with novice writers and eccentrics dropping in and eating up his valuable time for their own interests. So I let him know that he had replied several years before with good advice into my journeying abroad. "Oh I do remember something of the sort now. Sorry to say that I've been terribly busy and your very lucky that I wrote since I'm finding it increasingly difficult to answer all letters these days...how did you get here then?" This I explained and that I had recently completed reading "Mani: Travels in the Southern Peloponnese", which had made an excellent guide for me on my own journeying to Cape Matapan. He was pleased to hear me say this and indeed this book had been a driving inspiration into visiting the Mani.

I didn't want to bring up the popular topic of his days as a British officer assisting the resistance on Crete, as this was possibly a subject he was constantly questioned about. Nonetheless he voluntarily brought up some interesting facts of his time there during the second world war and only through asking him if he had received a small handmade book of photographs and prose I'd written called Tasmania: Island and People. He couldn't recall receiving my book, but a very close friend who collaborated with him during the campaign on Crete had come from Tasmania. Sadly he had been killed by the Germans and as I wasn't taking notes I never got his colleges name.

I moved on to the subject of Bruce Chatwin, since I was aware he knew him well and I have always liked his writing in spite of controversies. It was a fact that Chatwin had written "The Songlines" in Kardamyli  and had spent some time at Patrick's home. As it happened to be I had with me a topographical Taygetos map in my bag and would he be able to pin point where the late Chatwin's ashes had been spread. This he did and the following day I had very little trouble into finding the location of the small Byzantine chapel below the village of Chora. 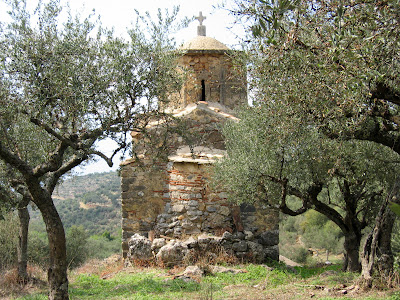 Time was pressing on and I said that I didn't wish to prolong him. But there was the inevitable question concerning the much awaited "Volume III". While I knew he had been asked this question possibly a million times before, would he please let me know if he ever did intend on completing the trilogy. He chuckled at my question and gave a swift answer - "Young man I'm working on it at this very moment you ask!" While quite comfortable with my surprise visit and willing to chat along with me, it soon became evident that he had all along been working in my presence and importantly on such a book. We discussed the topic in some detail and he assured me that he would soon complete it. Of course soon in Patrick Leigh Fermor time is on a different level. My little intrusion out of the unexpected had been a welcome, but a mere circuit breaker from his daily routine. Lastly I asked for one request, but only if he really wished to do so, and that was to sign my copy of Mani. He did not hint at any hesitation and felt honoured to do this for me.

This was my encounter with the travel writer Patrick Leigh Fermor who died on June 10 2011 aged 96. 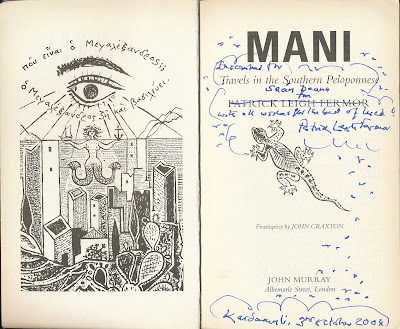